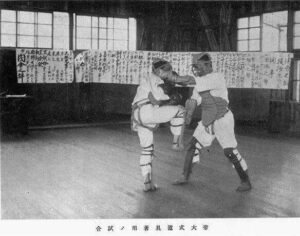 It was built the Kanbukan Dojo which former name Renbukai at Kudanshita Tokyo in 1945. Kanbukan founder was Korean master Geka Yung who learned from Master of Tomari te Kangen Toyama. After World War II, Master Geka Yung decided open the Kanbukan Dojo to teach Karate for give opportunity to the young Korean people who living in Japan at that time. The Kanbukan had record that other Masters belong to the Knabukan as instructor who was Mr. Oyama (Founder Kyokushinkai)☺ and Mr. Kinjyo (Founder Kenkyukai)☺ and so forth.  When occupied Japan, the Japanese government were controlled by the GHQ(General Headquater). GHQ also controlled Japanese Martial Arts organizations. (Somehow, Karate was not prohibit by them. Because Karate was new Martial Art at that time). Then they had confiscated their Armours and weapones from Ken do for dispose to them. Before they dispose them, we had chance to buy old Armous for cheap price to use practice for full contact sparring. That was time they start seeking the real way of fight in Karate do. But Bogu Kumite which is way of fight for full contact with armour had already researched by other Karate masters.(Mr. Funakoshi, Mr. Mabuni and Mr. Miyagi) but most major master of style were decided fight without armor for compete, but some of instructor were joined Kanbukan who wanted fight with full contact with armor Kumite. The Kanbukan had changed name Renbukan in 1951. Master Norio Nakamura became first director Renbukan after Mr. Geka Yung move back to Korea.The first All Japan Tournament had held by Renbuka at Kyoritsu kodo Kanda Tokyo Japan in 1959. It was first and open Karate tournament of Japan which was broadcast on TV station. Since 1959, Renbukan had established JKF(All Japan Karate do Federation), but that organization give away to the other style due to unite to one organization of Karate.

“in Karate there are no styles.”

Kanken Toyama, was born in Shuri, Okinawa on the 21st year of Meiji, September 24, 1888. His given name was Kanken Oyadamari and he born into to a noble family. In 1897 Toyama Kanken began his formal training in Toshukuken (Karate) under Master Itarashiki. Later, he apprenticed himself to Anko Itosu, who then became his primary teacher and was his greatest inspiration. He continued studying under Itosu until Itosu’s death in 1915. Toyama, Tokuda Anbun and a Kyan are commonly called the “three famous retainers of Itosu Anko.” Toyama also studied stickwork from a master called Ōshiro, and learned the Kushanku Kata from the Shuri Te master Chibana Chōshō (Chibana Chōshin’s uncle from the same clan), for whom he worked. Toyama was a school teacher by profession, and his chosen field of instruction was Karate. In 1907 Toyama was named Shihandai (assistant) to Itosu at the Okinawa Teacher’s College in Shuri City, and in 1914 he held a high office at the Shuri First Elementary School. Toyama was said to be one of only two students to be granted the title of Shihanshi (protege); Gichin Funakoshi was the other to receive this title from Itosu. In 1924 Toyama Kanken moved his family to Taiwan where he taught elementary school and studied related systems of Chinese Ch’uan Fa (Kempo). He studied Chinese Kempo under Chen Foji in Taipei and under Lin Xiantang in Taichung. The names of these arts were unusual and recorded as Taku, Makaitan, Rutaobai, and Ubo. It is believed Taku has its equivalent in the Japanese “Hakuda.” Taku is said to be one of central China’s Hotsupu (northern school) Ch’uan Fa and is further classified as Neikung Ch’uan Fa, that is, an internal method. Makaitan and Rutaobai, which the techniques of nukite (spear hand) came, and Ubo, all belong to the Nampa (southern school) Ch’uan Fa and are external methods or Waikung Ch’uan Fa. These later three styles hail primarily from Taiwan and Fukuden, China. Toyama sensei was also known to have studied and taught Tai Chi. Koyasu sensei learned Tai Chi from Toyama.

Early in 1930 Toyama moved again from Taiwan to mainland Japan and on 20 March 1930 he opened his first dojo in Tokyo. He called his dojo “Shu Do Kan” meaning “The Hall for the Study of the Way” (in this case the karate-way). Toyama sensei did not claim to originate a new style, system or school of thought, nor did he combine the different styles he had learned. Those who studied under him basically learned Itosu’s Shorin Ryu and the related ch’uan fa. Among the disciples he taught were Yun Hui-byong, the later director (kaichō) of the Kanbukan (vice-president Kinjō Hiroshi,later Zen Nihon Karate-dō Renmei Renbukai).

In 1946, Toyama Kanken, now a Dai Shihan, founded the All Japan Karate-Do Federation (AJKF). There is some evidence that the AJKF actually got its start in 1930s, however the federation evolved into a full fledged organisation when it was officially documented and sanctioned in 1946. Toyama’s intention when establishing the AJKF organisation was to unify the Karate of Japan and Okinawa into one governing organisation, providing a forum for the exchange of ideas and technique. Around 1948 a dispute involving Toyama and Funakoshi Gichin emerged surrounding the issue who was the “Karate originator“ or the leading Karate man. Itosu’s direct disciples acknowledged Toyama as such, saying that Funakoshi was merely a collateral disciple of Itosu and argued that as such it was not legitimate Okinawa Karate.

In addition, Toyama had been a regular course graduate of the Okinawa Teachers College, while Funakoshi only completed the rapid completion one-year course. Within the pro-Toyama camp it was argued that only those who had learned from Itosu during the long regular course at the Teachers College could claim to be the successor of Itosu. 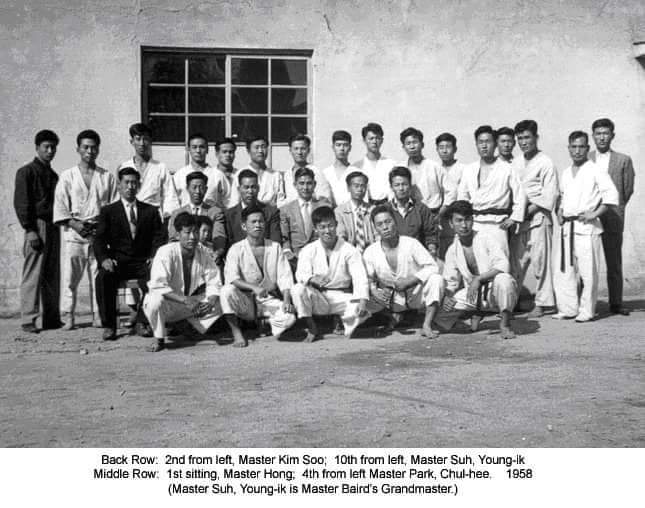 Throughout his lifetime Toyama followed his uniquely original theory, “in Karate there are no styles.” He specialised in Koryū Gojūshihō from the Yabu Kentsū tradition. This kata was brought into Shotokan and that is why the style now has Gojushiho Dai and Gojushiho Sho.

In 1966 he died at the age of 78. During his lifetime he published three books, 1) Karate-dō Okute Hijutsu, Karate-dō Taihyōkan, and Karate-dō Nyūmon. Toyama’s specialties in karate-do were strong gripping methods (Useishi No Kata and the Aku Ryoku Ho) of Itosu and Itarashiki and similar Chinese methods of finger and hand strengthening. He was the author of books Karate-do Taihokan and Karate-do. In 1949 Toyama was awarded a special title of honour by the Governor of Okinawa, Mr. Shikioku Koshin. It is also thought that when the Korean (Ch’uan fa) master, Yoon Byung-In came to train at his Dojo, he also studied Northern Manchurian Kwan-bop with him.